Let's go straight to the mailbag today to see what Ken Pfeifer has sent UDCC from the MUFON Files for UDCC readers to absorb into their reality view.
--------------
First up - Jan. 24th, 2012 - Location Texas:
Subject: TEXAS ARTICLE FROM KEN PFEIFER WORLD UFO PHOTOS

I had just clocked in for work, so I know it was 5:30 am.  I'm always there before sunrise.  I stepped out of the meeting room, where the time clock is and I don't know why I looked up but  there it was moving less than 5 miles an hour in an easterly direction. It was completely silent, and it was as big as a football field. I could tell how big it was because it was a clear morning and the stars were shining and as I looked up I couldn't see the stars, I could only see them further over past the outline of this triangle shaped ship. It was only about 500 feet above me as I watched it in awe as it moved slowly east, then in an instant it streaked across the sky so fast that I couldn't hardly follow it with my eyes. Afterwords I felt like I had worked a whole day, my adrenaline must have been pumping hard while I was looking at this thing. It only lasted a few seconds but seemed like longer it was like everything was in slow motion while I was walking and looking up and then all of a sudden it just picked up speed and streaked away towards the north east.

About 4:30 pm  I was sitting on the west side of my building . The sun was in the western sky . From the north western sky I noticed a flickering object about the size of a large star . It seemed to be reflecting the sun as it slowly moved towards the east and towards me.  It was moving very slowly and made no noticeable change in speed or direction and no noise at all.  I had my canon 20 d with telephoto lens with me and proceeded to take as many shots as I could after wasting about 7 shots with an incorrect camera setting.  The object eventually drifted over my building and towards NYC.  When I uploaded the photos, it was then that I realized the shape of the object . Like a slowly tumbling doughnut with a sort of metallic quality to it.  Considering its distance, I estimate its size to be about the size of a piper cub . However I cannot be sure.  The temperature was about 60 degrees with no noticeable wind that I can remember .  The sighting lasted about 15 minutes.
Special thanks to Doug Auld, witness and photographer.
===============================================
Now, check out these amazing pictures : 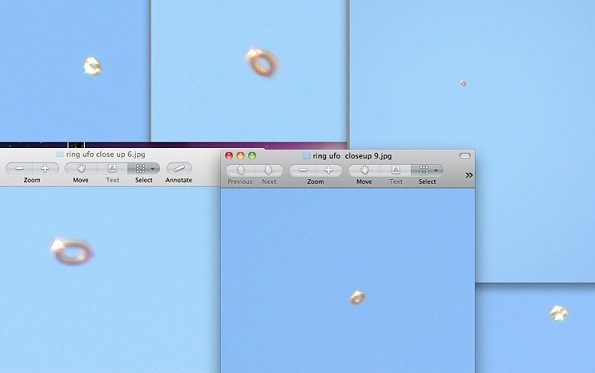 I was driving west on hwy 32 coming from Fort Meade, MD, moving at approximately 60 mph. Somewhere near the vicinity of the exit to 295, I just happened to glance up toward the sky looking southwest. I noticed a shiny/ reflective cylindrical object hovering in the sky. My first thought was that it must have been a passenger airliner, but I noticed that it was not moving in a linear fashion, but hovering! I kept glancing at the object to ensure that I was indeed witnessing a hovering object. I began to scan the skies for other flying objects and spotted what was clearly a passenger airliner moving from north to south, and appeared to be further away, in terms of direct line of sight, than the UFO. Although the plane appeared farther away, I could clearly distinguish it as an airplane, moving in a linear fashion, whereas I was unable to positively identify the hovering object. I glanced back toward the UFO and it was indeed stationary and not moving, and I could not identify wing, rotars or anything that would indicate that it was of earthly origin. I passed a row of tall trees on the south side of the highway, which obstructed my view, and I briefly lost visual contact with the UFO. When I finally cleared the row of trees, which no more than 10 seconds (approx.) elapsed, I looked back in the direction of the UFO only to discover that it had completely vanished. I kept glancing back toward the direction where the UFO was initially spotted, but I was unable to regain visual contact.

Posted by Rick Phillips at 5:49 PM