Since the rage about when UFO Disclosure "lives on" in a few corners of the internet - it's always helpful to remember what you have already forgotten - that the USA government DID provide UFO Disclosure to an online "for the people" petition. An effort by the Obama administration to be more open...supposedly. Oh those Democrats.

Anyway...that full answer to the petition used to be found at https://petitions.whitehouse.gov/response/searching-et-no-evidence-yet - and, as you can see if you click it...it's gone. I'm so surprised. Since truth has little value anymore...I can see a full denial of any comment will eventually be what is accepted.

But...to back up a bit, and to refresh your cranium... this was the organization that petitioned for the government response...and as you can see ....they still have up the outcome given. http://www.paradigmresearchgroup.org/disclosure_petition.htm - below is their summary:
On 9/22/11 PRG petitioned the President to formally acknowledge an extraterrestrial presence engaging the human race. The White House response on 11/4/11 from the Office of Science and Technology Policy stated, "The U.S. government has no evidence any life exists outside our planet, or that an extraterrestrial presence has contacted or engaged any member of the human race. In addition, there is no credible information to suggest that any evidence is being hidden from the public's eye."

That, of course...didn't go down so well with our so-called Free Press; and below, you can see how none other than baby-faced Willie Geist raised some suspicions about the official government answer.

Now...thank goodness for YouTube - as the link to the below UFO Disclosure Video with Willie G still works... Unlike the original source link at MSN that you can see and click at the above YouTube source.

Now...at the time...with a blog named UFO Disclosure Countdown Clock - I was on this story - as you can read right here https://ufodisclosurecountdownclock.blogspot.com/2011/11/phil-larson-declares-no-ets-on-earth.html - now..if you read the at the link...you will find that the UFO Disclosure statement was made by a low level staffer named Phil Larson... and I took the liberty of looking at his name via the esoteric prism of truth...the anagram - and guess what the letter of Phil Larson equals?  Wait for it....................An Op Shrill.

Over A Thousand Posts Are Archived
Dig In

Posted by Rick Phillips at 6:11 PM No comments:

Orb "PowerUP" Is So Strong It Produces A Halo

For over a decade now...UDCC has been showing the Orb Phenomena as BEING largely..the UFO phenomena...some have taken the night vision calling/belief protocol to new levels .... this is from  the night of 22nd of Sep 2018, filmed by James Gilliland and the STARGATE UFO YOUTUBE CHANNEL. The link to the video below is Here....Orb Powers UP - with 50,000 views and a 50/1 ratio of positive to negative. BTW...I do not subscribe to the idea that Orbs are crafts...except with rare circumstances. 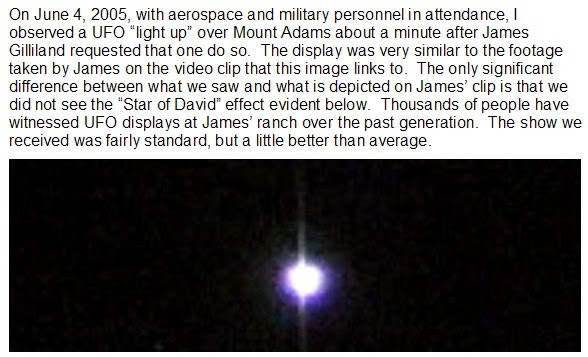 Indeed...the author of the blog interacted with another blog that I was part of at the time...called The C Influence. Which I also covered here at UDCC - Arvin Hill - His Description Of The Phenomena of which I provide an excerpt below:
I started peeling the UFO onion two years ago after keeping the subject at arm's length for thirty years - in part because it was too enigmatic, and the signal to noise ratio was indecipherable; but also to keep the cultural contamination to a minimum just in case I should ever pursue my own research. I was afraid of a lot of things as a kid, but I found UFOs and their ostensible occupants intriguing, not frightening.The contextual nature of what transpired makes it impossible to effectively convey how it all unfolded. Some events included: profoundly mystical dreams; close proximity fly-by's, day and night; numerous structured, choreographed demonstrations illustrating the relationship between UFO stealth and human cognition; telepathy; photography. The majority of my experiences occur while I am....

Posted by Rick Phillips at 8:05 AM No comments: