Good Morning Clockers and New Visitors to UDCC, thanks for having an inquiring mind........... I check the stats for `traffic' to this page on a regular basis and today turned up someone who was directed to this page because they searched about being who are `100 billion years advanced'. My science Clockers know the problem I assume......... Anyway, today I dig once again into the mailbox and select the best UFO MUFON reports screened and promoted by Ken Pfeifer of the MUFON NJ chapter. As you can see by today's eye-catching title, `Tiny Hairless Creatures' will be the `twist' to today's first UFO tale of high strangeness.
===========
Subject: HOUSTON ARTICLE FROM KEN PFEIFER WORLD UFO PHOTOS
Close Encounter in Houston Texas

My mom, sister and myself were watching T.V. when we heard a low but distinct hum. Thinking it was the goodyear blimp, my sister and I looked out of the back window of our home only to see a UFO rotating very slowly above our house and moving in a straight line over our neighborhood. It was very low as if I could hit it with a rock. We yelled for our mother to come over to see it but she thought we were making it up. My sister and I watched the bright lights of blues, reds and greens flicker and spin on the bottom of the craft. The object itself was dark but because of the illumination we could see that it was as big as four houses. We were not scared but facinated as we watched it glide past the horizon. To this day we still share this memory. About 20 years later I was talking to a friend who grew up in the same neighborhood and when I told him about the experience we had had, he went flush because after narrowing down the time frame he too had experienced something that he had not shared with anyone. He states that that exact same night, some sort of tiny, hairless creature had appeared in his room, scared the mess out of him then disappeared. I know this sounds like a story but I have witnesses. I swear that this is true!

I was driving to my farm in the country on a rural road.  While adjusting my sun visor two shiney silver aircrafts caught my eye straight up in the sky. They were lower than an airplane, about 10k feet up. I saw one, then the other about a mile behind it in a straight line.  I pulled over and got out of the car and tried to take pictures with cell phone, but did not show up on camera.  I saw no wings.  They were cigar shaped with a black band in the middle. The same as pictured in Roger Marshs 9/29/11 article.  They eventially disappeared out of sight.  The day was very sunny, no clouds in sight, about 10 a.m.  Two days later, I was travelling about a mile away, also on my way to the farm and saw one of the same a/craft.  I grabbed my binoculars and saw the craft turn slightly upward and disappear into the sky.   I know these are not airplanes; there were no wings, no sound or trail and hovered rather than flew.  In the past, I have seen a blimp type craft with a fish tail hovering over the woods line near my farm.  It seemed to be over the county waste area. No sound or movement, then disappeared.  I saw this one about four times, but not since last spring. In all cases, I had no fear of the crafts, just a reluctance to report for fear of government contact.  NOTE: The above image is a rendering. 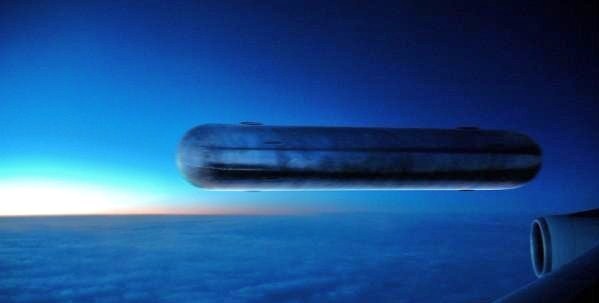