Good Morning Clockers. And, welcome to all newbies on today, August 21st, 2011 - the latest hoaxed date of supposed UFO Disclosure today by President Obama. (To be done in an offhand manner while discussing other things.) Yeah Right.

But, as fate would have it - and interestingly, I ran across some REAL HEAVY INFO about UFOs just yesterday (all in a book written by a Physicist) that I wanted to share with all UDCC readers. And, it's not just casual info - we are talking about a man who looked over the data of over 200,000 UFO reports.

The link I found this info at yesterday first Here - led the post with:
Explained are the famous EM effects of car engines and headlights dying and some temporary paralysis near UFOs, and why UFOs do not create sonic booms at supersonic speed. Also how UFOs neutralize inertia and do tremendous accelerations without a sound, how they float in gravity, how they propel themselves and why they do zig-zag motions instead of smooth turns, why they sometimes exhibit “falling leaf” motion, and why they occasionally levitate objects and even cars.
=========
This is the actual `chapter' of his book that explains the Physics of the UFO, from his website Here that lays out the chapters of his book. 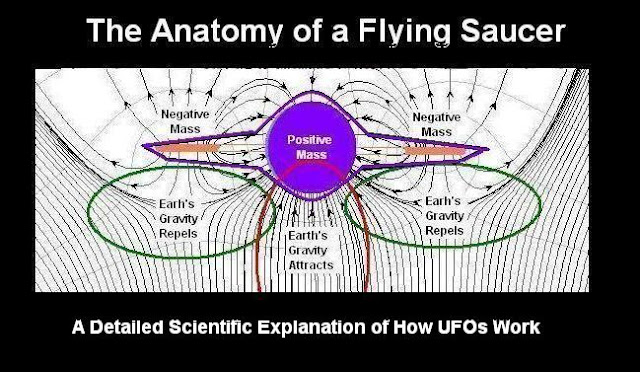 Is this an example of a real answer being lost in the proverbial shuffle? Has UDCC actually brought UFO Disclosure on August 21st as promised?

Yeah, right.
=============================
(This is how John describes his book at Amazon)
This book explains how UFOs work. It solves essential mysteries of UFO behavior that have been well-documented and unsolved for over fifty years. How is this possible? Very simple. The Center of UFO Studies (CUFOS) has for 30 years been accumulating a searchable database of UFO eyewitness reports. To date they number 209,000. To my knowledge no one has taken a serious look at these reports. I now have. All the conclusions in the book come directly from interpreting the eye witness reports. The basic conclusions were an inevitable consequence of applying standard physics principles to the reports. The fundamental revelation, that UFOs possess gravitationally negative mass, is an inescapable consequence of the fact that UFOs sometimes "levitate" people and cars. Gravitationally negative mass, when spun at high speed, allows UFOs to negate inertia. This fact suddenly throws the whole field of UFO behavior open. Now essentially all the activities of UFO can be understood. They can not only be qualitatively understood, but they can be calculated and predicted in detail. We do the calculations in the book and provide diagrams. We not only explain how UFOs kill inertia, but how they float in gravity, why they do zig-zag motions instead of smooth turns, why the sometimes exhibit "falling leaf" motion, how they propel themselves, and why they sometimes levitate objects. We explain the famous EM effects of car engines and headlights dying near UFOs, and why they do not create sonic booms at supersonic speed.
=========================================
(click book icon below for more info)

be perfectly normal. They are insulated from the environment as they travel in space and have been seen underwater. The occupants would not feel any accelerations or movement since there is no inertia inside a UFO.

2. The 30 foot size limit was for saucer shaped UFOs. Other shapes may not employ negative mass the same way so they may not have the same physics.

at about 200 or more feet in the Hudson Valley and Belgian waves with no apparent effects on the ground. In the Hudson wave there were only 2 EM effects mentioned out of 7,000 reports, and only as the UFO passed the top of a bridge
tower did the lights at the top of the bridge go out. The pronounced effects felt usually have come from
saucer type UFOs. Apparently the shape of the inertia free regions they create is spherical and extends further out. Just last week a former commander of a missile silo revealed that the missiles malfunctioned as UFOs passed overhead.

Posted by Rick Phillips at 7:31 AM