In 2012 the Orbs seem to be displaying `more structure' and variations. Assuming the Orbs to NOT be `crafts' but instead some sort of `probe', sky creature, or anomalous phenomena from outside of the time-cone - the variations would seem to be endless. Are we seeing some sort of displays meant to be a disclosure?


Here's more from the recent MUFON database as obtained by Ken Pfeifer and distributed to a set of websites including UDCC.
--------------
Subject: ALIEN CRAFT PHOTOGRAPHED OVER NORTH CAROLINA    .....     KEN PFEIFER WORLD UFO PHOTOS

I went on the MUFON-NC website Saturday afternoon and read about recent sightings in NC. Being familiar with Belmont, I was intrigued by a recent report. So, I invited a friend, Nancy Queen, to go to a boat docking area Saturday night and stake out the area. This location is about a mile south of the Allen Stream Plant in Belmont, NC. We arrived at the site about 7:30pm and took a few pictures. When it started getting dark, I mounted my camera on a tripod and waited to see if anything got our attention. As we stood on the cement slab attached to the boat docking area, I caught sight of a flying object coming towards us. The object was glowing orange. I called out to Nancy as two more aircraft came over the treeline orange lights aglow. The first aircraft stayed in front of the other two aircraft which were flying side by side quite close to each other. As my camera was pointing in their direction, I started snapping pictures. Although the aircraft seemed to be moving much slower than the jets we had seen earlier in the evening, I had no idea it took two minutes for them to pass over our heads, heading south to north toward the Allen Stream Plant. (Please note that the first picture was taken at 9:25pm and the last picture at 9:27pm.) The reason I am accurate about the directions is because I took my compass with me and had already checked to ascertain north and south. My camera was attached to a tripod and there was no movement on my part. There was no noise as the aircraft flew by us. Amazingly, there were several boats being placed on their trailers during this time frame but nobody but Nancy and I noticed the aircraft. And, we were making quite a todo about them. What struck me about the three flying objects was the single orange glow each projected. I couldn't make out any features on the aircraft as the light was blinding. Nancy managed to get some pictures with her camera as well as me. 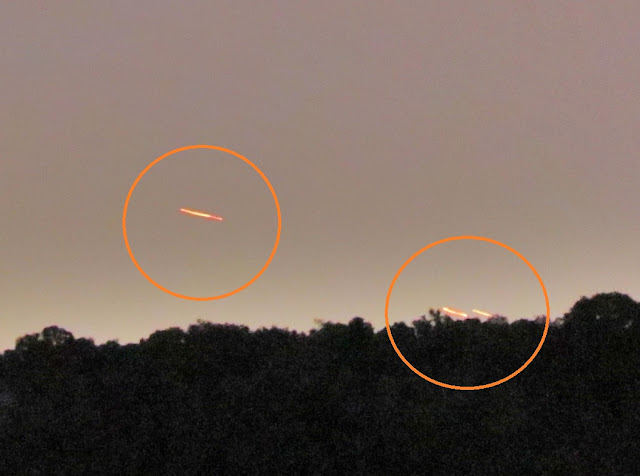 My wife Jen was feeding our newborn son at 4:00 am when she notice a light out in the distance over the street lights. It was a glowing light orange that looked to be hovering or moving very slowly. Moving up and down for about 5-10 minutes. She then woke me up and I saw the same movements. We went downstairs and out to our patio and saw it moving very slow towards us at what seemed like 300-500 feet in the dark sky. I ran in to grab the camera as it started to pass over us. That is the photo I got, not the best due to no flash. I could see details of the object when the lights flashed. It looked like a steath shape, but was lighter in color..like grey. It did look like something our military could be testing. Just seemed strange at 4:00 am...no way was it a commercial plane. The sound was so minimal, humming. I have heard military jets and they are very loud and rumble...this was not the case. Had multiple lights flashing the whole time. Finally flew over our house and headed west towards Syracuse, NY. The photo is not the best and hopefully you can make more out of it.
============================================= 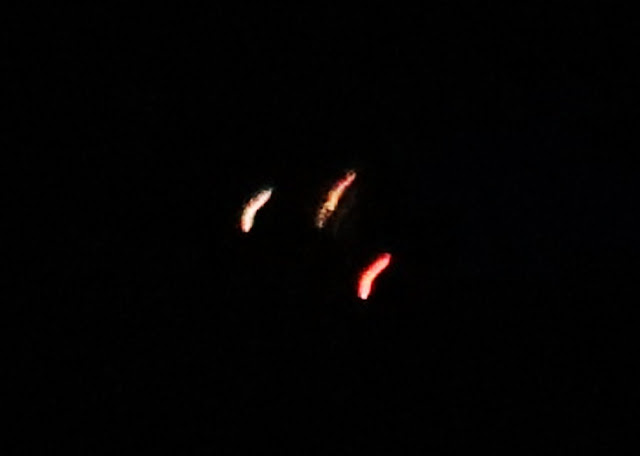 Posted by Rick Phillips at 4:35 PM