Going To The Light At Death - Two New Theories

As Clockers know - I have been producing E-Books on Kindle from some of my best material on two of my blogs this year. Yesterday I released my fourth book and the second this month called `Going To The Light At Death' - The New Theories.


The book is priced at 99 cents for now, and perhaps indefinitely, as I want these ideas to be as widespread as possible; to be available to the offered up explanations for the light suggested by religions and the mainstream media. It was a labor of love putting this book together and I bet you will enjoy it.

I was watching over my kids playing in a kiddie pool in our back yard. I was sitting on the steps of one of our guest cottages. This must have been at about 1230-1240 PM. My eyes were drawn to the sky by a column of dust left by a dust devil.  This was probably only about a block away. In it, rather through it, I noticed an object that I first figured to be a distant aircraft. Something about it kept my attention. At first it didn’t seem to move, which was odd for an object in the sky during the brightest part of the day. Then it seems it was moving very slowly in an east-by-southeast direction. It was too high up, and away from any known objects to get any real perspective. I would say that this object could have been as far away as over Tucson or Phoenix and as high up as possibly orbital. Soon, it moved slowly toward the south. At some point my wife came out onto our back deck and asked what I was looking at. She must have sensed that I was watching something strange. At some point one of us noticed there was another smaller object nearby.  I can’t remember if I had noticed this before she came out or not. She grabbed her camera from inside the house, a Canon EOS Rebel T3i with EF-S 55-250 mm telescopic zoom lens. She began taking photos. We ended up with 49 pictures captured at (on average) 6 MB each. While taking pictures we could see up to 13 of the smaller objects. They appeared to be moving and my wife and I think that at least two of them moved up to the bigger object then moved away at a different direction. This cluster was generally 45 degrees above horizon,  300 degrees magnetic azimuth from Tombstone.  Sometime shortly before 12:44 PM I went just inside the back door to post on FaceBook via our dining room PC that we were watching UFOs. At 12:50 I posted that we lost sight of them. They had moved slightly northward and then just dissipated. I know it’s debatable whether stars can be seen during the day but we checked Google Sky shortly afterward and did find that Uranus was in that area of the sky at the time of our sighting. But it’s debatable whether Uranus can be seen in the best of conditions at night.   I have been with the military for 26+ years, much of it as an Intelligence analyst. I have traveled the world. I have watched the sky, aircraft and celestial bodies for all my years. I have flown extensively. I am a bit of an aviation enthusiast. I tell you all this because I have never seen anything like this before and it just didn’t fit. The only thing I can propose to explain it is that it was an unusual effect of the annular solar eclipse that was to happen a few hours later. Maybe the moon was already casting a shadow (that was unseen to us) on the outer part of the atmosphere in the direction that we were looking and this somehow allowed us to see stars in that direction during the day. Maybe it even magnified them. The movement could be attributed to atmospherics and one star becoming visible while one was disappearing from view. 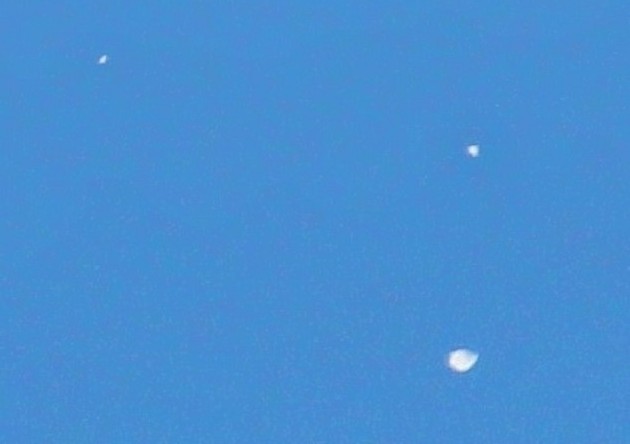 Posted by Rick Phillips at 1:23 PM