A WOW - UFO Picture From Maine

Hello everyone, thanks for visiting UDCC today - it is appreciated. Today I bring a `wow' UFO photo - IMO. The photo comes to me via UDCC's association with Ken Pfeifer the N.J. MUFON Chief Investigator who is hand selecting cases he would like to bring to attention and share with UDCC readers. (And, perhaps the Pentagon?)

This is to report a series of sightings in the Mooshehead Lake region, dating back several years, most recently a recurring phenomenon. On several occasions since June of this year, my wife and I have observed through our bedroom window, bright, usually star-like objects that alternately hover then move rapidly in what appear to be random directions, but generally within a confined region of the sky. No sound is heard. No colored lights. Apparent magnitude varies quite a bit and sometimes the object will wink out then appear again in the same or a different location. The most recent siting (8/6/11, approx 0415) was different in that the object appeared square and was larger, subtending an angle equal to a dime at arms length. During this last time and on at least one other occasion, the sky was cloudy and it was raining during the period of observation. On one occasion, I was able to photograph the object moving about with a 200 mm zoom lens, resting the camera on the window frame. No detailed information can be extracted from the images due to movement artifact but expansive movement over a period of about 30 minutes is documented. The area of sky in which these observations have been made is northwest of our location and we are on the east side of Moosehead Lake. As an amateur astronomer, I have a pretty good sense of stars one might expect to see in the polar region at any given time and this does not fit with any of the patterns, nor is the movement consistent with position changes related to the earths rotation; nor does it fit the pattern of satellite trajectories. Two other sitings I should mention were when I was out with my telescope doing astrophotography. The first, several years ago, involved a very bright object, moving at a tremendous speed, from west to east across the lake, essentially going from horizon to horizon in seconds. No sound heard. No colored lights. The second was in late summer of 2009. I was up on a ridge behind our camp with the telescope. While doing a bright star alignment, I noted a bright, disc-shaped object suddernly becoming visible over the western drop-off. Because of the elevation, I thought at first that I was seeing a plane with its landing lights on. However, this object stayed in the same position for several minutes then just winked out. 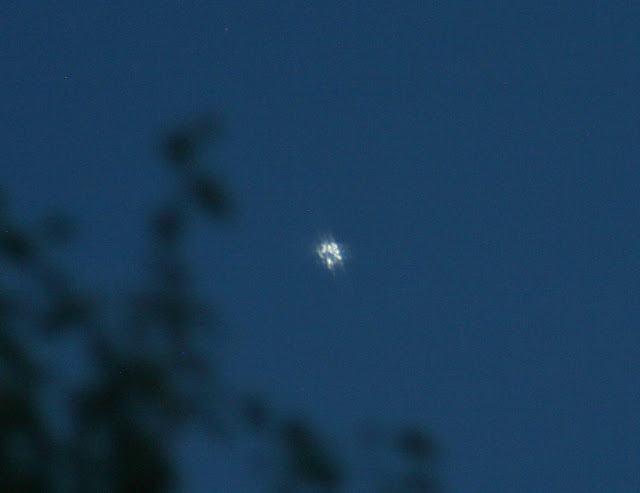 Posted by Rick Phillips at 1:29 PM