As Clockers know, I've been highlighting me finding the POST REMOVALS by MUFON involving what I call the complex Orb phenomena that seems to be evolving in certain localities that are being observed or initiated by certain individuals. (Does an Orb twinkling in the sky unobserved twinkle? - Does a tree that falls in the woods.....) Most of these removals that I've discovered invovled reports with VERY good pictures of the unknown phenomena.

As a result.... a new policy at UDCC in 2015 - I will download all pictures in advance onto my computer before posting.... uh oh...MUFON better get someone to fully edit that Latest 20 UFO reports BEFORE they get to the public (like me who monitor them)...... that said, how could MUFON look worse than what I've already discovered... that some photos are simply too hot for their general public database. The ones in the suburb of St Louis comes to mind for 2014.... those Orbs ran along - near power lines for about a mile or two and were traveling in a group and photographed multiple times in different but close locations......... yeah, the censorship is THAT BAD.

I found this really cool post at Global Love Think Tank called Space Sluts.... yes, sluts. You see the fantasy idea of `aliens' overpowering sexy women is hardly new... this is the stuff the boys of the 40's, 50's-60's grew up with.. and their sisters who snuck a look at the taudry material. 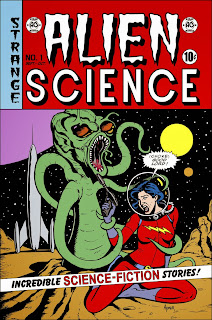 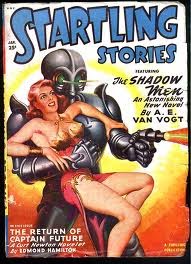 There's more pics and bigger pics at the link above. Probably PG13 to be safe.
OR BUY YOUR OWN FROM AMAZON AND KICK ME THE 4%