China Daily Features Post With Stories of UFO Landings and Aliens - And, Picture of July 2012 UFO Too

PHOTO OF A MYSTERIOUS OBJECT OVER CHINA
JULY 2012 CHINA

Heilongjiang residents said they saw an unidentified flying object on Friday, the second time in a week such observations have been reported in the northeastern province.

Zhang Wei and Dai Guobin, workers at a sand processing plant in Zhangjiadian village in Harbin, capital of Heilongjiang, said they witnessed a black flying object, the shape of an eagle and larger than an airplane, at noon on Friday.

The object hovered in the sky about 500 to 1,000 meters from the two workers for about a minute and then flew off, according to Zhang and Dai.

Zhang reported it to Chen Gongfu, 70, a retired professor from the school of astronautics at the Harbin Institute of Technology.

Zhang told China Daily that he was not sure if the object the two saw on Friday was the same one reported Sunday in the Phoenix Mountain National Forest Park, which is about 200 kilometers away from the sand factory.

Chen, who is studying the UFO reports in the forest park, said he has talked to at least four eyewitnesses who said they saw the same flying object at different times and locations.

Li Hui, a tourist, said she saw a luminous flying object hovering low in the sky at 3:42 pm on Sunday when a photographer was taking her picture at a viewing platform in the park.

Li was quoted by Harbin Daily as saying that she unconsciously looked back after taking a picture and saw a floating, shiny object.

But the flying object was taken in a picture by the photographer, Wu Chunyan, who also saw the UFO and quickly pressed the shutter.

Chen, the retired astronautics professor, said the object looked a lot like a moth when he first saw the picture, but he ruled out the possibility as more eyewitnesses in different locations said they also saw the flying object.

Sun Yan, a worker in the park, who was about 10 meters beneath where Li Hui stood, and another worker who was at the gate of the park said they saw the UFO on Sunday. Sun Li, a forest worker, said she witnessed a bright object, as big as a washing basin with gaseous columns on both sides, at around 8 pm the same day, according to Harbin Daily.

Skeptical of the reports is Zhu Jin, curator of Beijing Planetarium, who has been studying UFO reports for years. He said he believes that the flying object was a winged insect.

"It's quite clear that it was an insect, and you can clearly see its wings. It's luminous because of the photoflash," he said. "There is no other possibility as far as my knowledge can tell."

Harbin Daily reported that the photographer used "forced flash" when taking the picture, meaning the camera's flash was used despite strong lighting in the background.

"Many people called us and asked if UFOs really visited the park," Kang Tai, a manager with the park, said on Friday.

Kang, who has worked in the park for more than four years, said that although he personally did not see a UFO, he received UFO pictures taken in the park by tourists several times, most recently in 2011.

In fact, 18 years ago, UFOs reportedly visited the park.

Meng Zhaoguo, a worker in the park, and two colleagues said they saw a strange unidentified object in June 1994.

"I saw the UFO as it just landed in the hillside," Meng recalled.

Curious, Meng asked a relative to go with him the next day to identify the object.

"I was suddenly pushed back (when I got close to the object) just as if I was receiving an electric shock because I had such an experience in the past," he was quoted as saying by Heilongjiang Television, "And the object was very noisy."

Meng said he saw a being from outer space at his home several days later.

As it got closer, Meng said, "my house became extraordinarily bright and I saw it standing in front of me. It was just like us human beings".

"It pushed me quickly and then ran out." 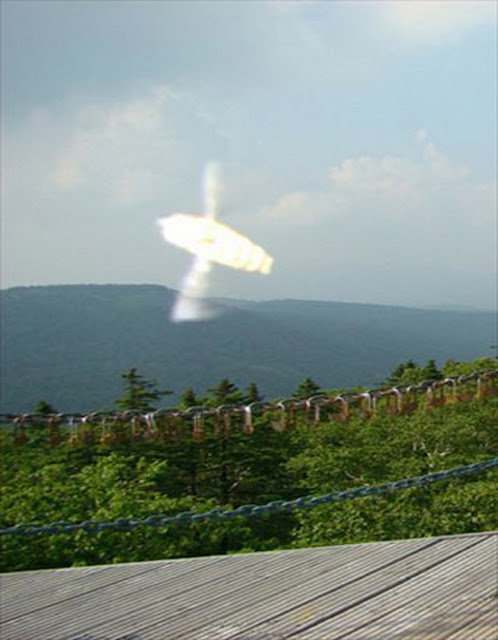 PHOTO USAGE VIA KEN PFEIFER
===============================================
A big thanks to those purchasing my EBooks yesterday and for downloading the FREE EBook off my author page - totally 297 people worldwide downloaded the free book. `Going To The Light At Death - The New Theories' - please write a review and share it with others. I also heard from Shaman Lujan Matus in the last day or so and got a welcome thumbs up on my `E-Book' about him. Indeed, he has posted a link on his website too and forum. You can find the book below:

HERE'S ANOTHER OF MY EXCELLENT UFO BOOKS FROM PREVIOUS POSTS ON UDCC: The 14% UFO Myth And Other UFOlogy Essays

Posted by Rick Phillips at 2:08 PM